What is a PoE switch? The difference between PoE switch and PoE+ switch!

PoE switches are defined by the IEEE 802.3af standard and can provide up to 15.4W of DC power per port.

Over the past few decades, it was common for businesses to lay two separate wired networks, one for power and the other for data. However, this added complexity to maintenance. To address this, the introduction of PoE switch. However, as the power demands of complex and advanced systems such as IP networks, VoIP, and surveillance change, PoE switches have become an essential part of enterprises and data centers.

With the development of PoE technology, a new IEEE 802.3at standard appears, called PoE+, and switches based on this standard are also called PoE+ switches. The main difference between 802.3af (PoE) and 802.3at (PoE+) is that PoE+ power supply devices provide almost twice as much power as PoE devices, which means that commonly deployed VoIP phones, WAPs and IP cameras will run on PoE+ ports .

With the growing demand for higher power PoE switches in enterprises, devices such as VoIP phones, WLAN access points, network cameras and other devices need new switches with higher power to support, so this demand directly led to the birth of PoE+ switches.

c. Further cost reduction: This simpler PoE+ uses standard cabling (Cat 5) to work with ordinary Ethernet interfaces, so no “new wire” is required. This means that existing network cabling infrastructure can be leveraged without the need to run high-voltage AC power or separate power connections for each embedded switch.

In conclusion, PoE switches and PoE+ switches can power network switches such as network cameras, APs, and IP phones, and have high flexibility, high stability, and high immunity to electromagnetic interference. 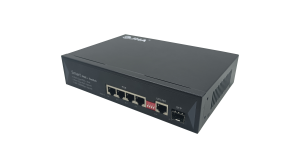